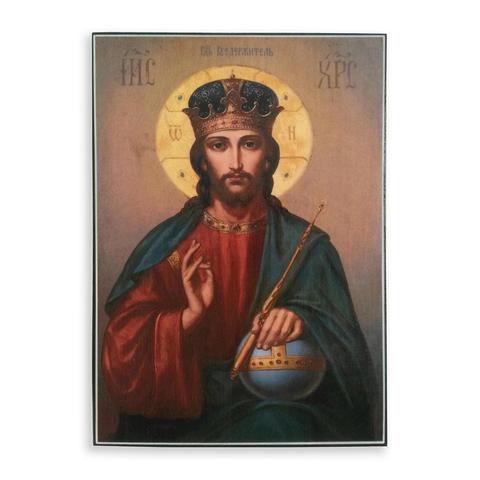 The first icon represents Jesus Christ as king. It has to do with the idea of ​​the “Kingdom of God,” where Jesus is described as sitting at the right hand of God. This, however, should not be confused with the mocking “King of the Jews,” which was given to him at the crucifixion. Many Christians around the World consider the “royal ministry” of Jesus Christ to be one of the three functions. According to them, Jesus Christ is a prophet, a priest and a king. The name “Christ the King” is often used for churches, schools, hospitals, religious institutions. As this is a reproduction of the original icon, unfortunately we do not have information about the author of the original icon. 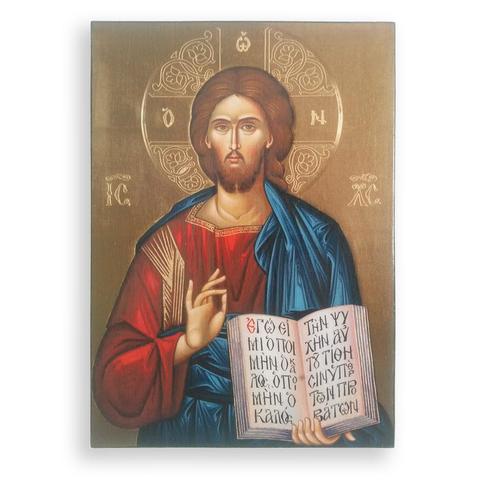 On another icon of Jesus Christ you can see that he is holding a book in his hand, on which you will notice an interesting manuscript. It is a Church Slavonic language used by Bulgaria, Serbia, Russia, Northern Macedonia and others. This language was created in 855 by the brothers Cyril and Methodius, who later became saints. The original alphabet was called “Glagolitic”, but later the letters were replaced and began to be called “Cyrillic”.

In our rich catalog we offer several icons of different sizes of the Holy Brothers – Saint Cyril and Saint Methodius. Check them here.

The Cyrillic alphabet was created in the Preslav school (Preslav was the capital of Bulgaria during the reign of Tsar Simeon the Great). It, together with the Glagolitic alphabet, are the two alphabets used in the writing of the Old Bulgarian literary language. After the death of the brothers, their Bulgarian students Nahum, Kliment and Angelariy arrived in Bulgaria and began to spread the new alphabet. This was done at the special invitation of the Bulgarian Tsar Boris.

Tsar Boris baptized the Bulgarians in 864, which is still a pagan state. He also distributed the alphabet of Cyril and Methodius and Bulgaria became the first country in the world to accept this alphabet as its own and official. Russia did not exist at that time, and today’s Serbia was built by an alliance of several tribes, but existed as a state only in the 12th century.

Today the Cyrillic alphabet is used in: Bulgaria, Bashkortostan, Belarus, Bosnia and Herzegovina, Buryatia, Dagestan, Ingushetia, the Kabardino-Balkaria Republic, Kazakhstan, Kyrgyzstan, Macedonia, the Mari Republic, Mongolia, the Republic of Mordovia, Russia, Serbia, Tatarstan, Tuva forest, Tajikistan, the Udmurt Republic, Ukraine, Chechnya, the Chuvash Republic. In total, more than 300 million people use Cyrillic and it is present in over 70 languages. The Cyrillic alphabet in its original form is used in the Church Slavonic language, used today in a number of Orthodox churches in Eastern Europe.

Dear friends, this was the story of “Icons of Jesus Christ and History of Orthodox Manuscripts“. We hope you enjoyed it. The next story is coming soon.

We use cookies on our website to give you the most relevant experience by remembering your preferences and repeat visits. By clicking “Accept All”, you consent to the use of ALL the cookies. However, you may visit "Cookie Settings" to provide a controlled consent.
Cookie SettingsAccept All
Manage consent

This website uses cookies to improve your experience while you navigate through the website. Out of these, the cookies that are categorized as necessary are stored on your browser as they are essential for the working of basic functionalities of the website. We also use third-party cookies that help us analyze and understand how you use this website. These cookies will be stored in your browser only with your consent. You also have the option to opt-out of these cookies. But opting out of some of these cookies may affect your browsing experience.
Necessary Always Enabled

Performance cookies are used to understand and analyze the key performance indexes of the website which helps in delivering a better user experience for the visitors.

Analytical cookies are used to understand how visitors interact with the website. These cookies help provide information on metrics the number of visitors, bounce rate, traffic source, etc.

Advertisement cookies are used to provide visitors with relevant ads and marketing campaigns. These cookies track visitors across websites and collect information to provide customized ads.

Other uncategorized cookies are those that are being analyzed and have not been classified into a category as yet.